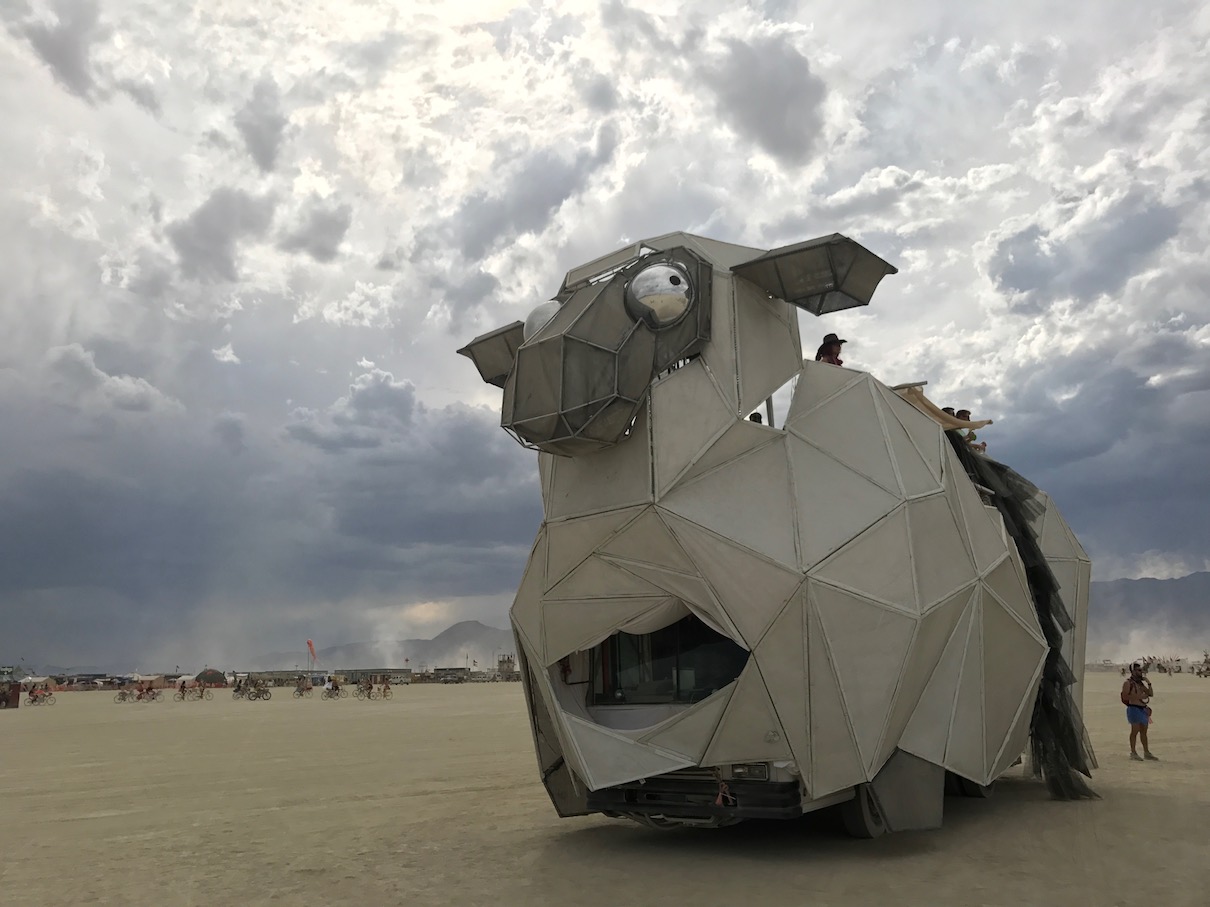 2016 was my first year burning with BAAAHS. In 2016 we set out to complete an ambitious number of new structural changes to Pearl (BAAAHS’ other gendered daytime name). We decided early in 2017 that projects would be kept as light as possible, perhaps with an eye towards efficiency. I took the opportunity to make enhancements to our lighting and light control systems.

The existing system was simple; a laptop running code writing DMX signals to controllers that drive lights. The system mostly worked, but it was fussy. The system needed a few hardware modernizations, documented process and infrastructure code, and training on how to administer and use the system. We set out to achieve all this for 2017.

The existing system consisted of a non-SSD-based netbook, a router/switch with underpowered transmission capabilities, a partially-operational UPS (functioning as a strip only), a DMX to ethernet bridge, and a slew of random cabling. All of these parts lived and mingled with all the playa dust in an open milk crate.

Driving over a hundred lighting panels and forward facing sharpies, the system mostly works as expected for its users. On playa having a system that mostly works is pretty much the bar to aim for. There was, however, room for improvement in some low (and high) hanging fruit…

The UPS’ battery was years old and had suffered through the worst of power conditions. It was dead. The power supplied by an auxiliary generator was mostly stable. When it wasn’t stable it would cause the laptop’s network interfaces to go down. This, in turn, would cause chaos between the OLA daemon driving the lights via the networked DMX bridge and the BAAAHS light server service. Bounced power, even if for a second, meant rolling a life-endangering, exhaust overcoming save and crawling in the jefferies tubes to restart things. 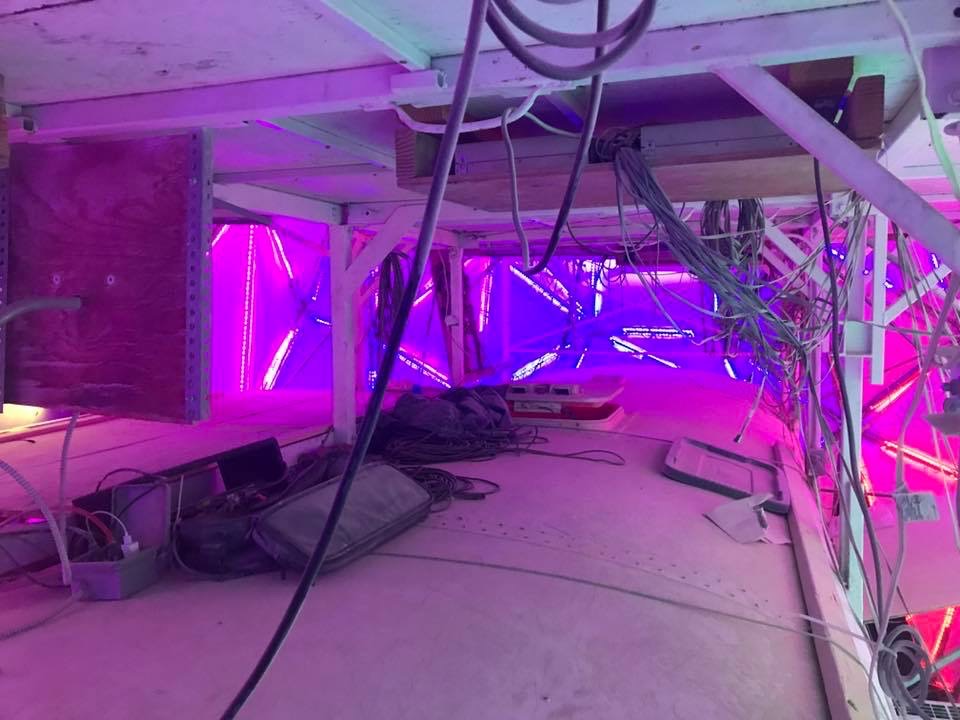 The hardware we had was already operating with multiple workable failures. Any additional, single component failure could render us in bad shape. For example, the critical server and services ran from a 4-year-old, platter-based netbook.

The hardware we had was old, it had gone through many undocumented/ad-hoc configuration changes over time, and many parts were no longer procurable. In most cases it was not precisely clear what to re-order and how to rebuild it should we need to do so.

Only a few individuals understood how the server lit up lights. Failures generally meant unsuccessfully chasing down the few BAAAHS shepherds in the know.

The new architecture would be headless and based on the Raspberry PI 3. The PI 3’s armv8 multi-core processor was more than enough for what we needed (perhaps close to as powerful as the generations-old Atom in the netbook it was to replace).

Other than migrating to the RPI3, we aimed for the following architecture and process improvements:

Single units were important because it would allow us to have fully functioning backups in a small amount of space that can easily be mounted on or near to the lights and control boxes. This would be particularly useful for off-playa events wherever infrastructure was used.

Most of the effort for Single Unit production meant painstakingly scouring the web for products, digging for their hardware specifications, and a lot of Amazon returns. It’s difficult to know exactly what, say, the power draw on the PI will be from a USB <–> DMX bridge where all other competitors warn of high amperage pull and what not.

It seems obvious, but as people come and go from the community, or take a year off, their knowledge of the exact parts used and their function is too. This adds potentially significant effort after the fact, in the case of failure, or in the general case another unit is required.

An ansible playbook was created to provide the self-documented, repeatable process of constructing a server out of the aforementioned list of commodity hardware. A server is fully functional and ready to go after execution of the playbook.

The playbook executes a number of roles aimed at:

In addition to the documentation within the infrastructure ,code bases are additional design, usage, and training documents and presentation materials. Prior the playa this year, many BAAAHS shepherds underwent training on writing lights server shows, construction, technical setup, troubleshooting and other training workshops.

View and overall presentation of all the BAAAHS lighting systems here.

Additional services were created to assist BAAAHS shepherds in troubleshooting and diagnosing problems with the lighting systems. This primarily included custom scripts, messages, and on-device documentation of the systems and feedback such as temperature, load, service status, etc…

On top of that, 2017 was the first year the controlling systems used real-time environment feedback (in form of sound analysis) to provide automated adjustments to lights from DJ playback. Woo hoo!

The RPI3 has a few network interfaces used for different things: 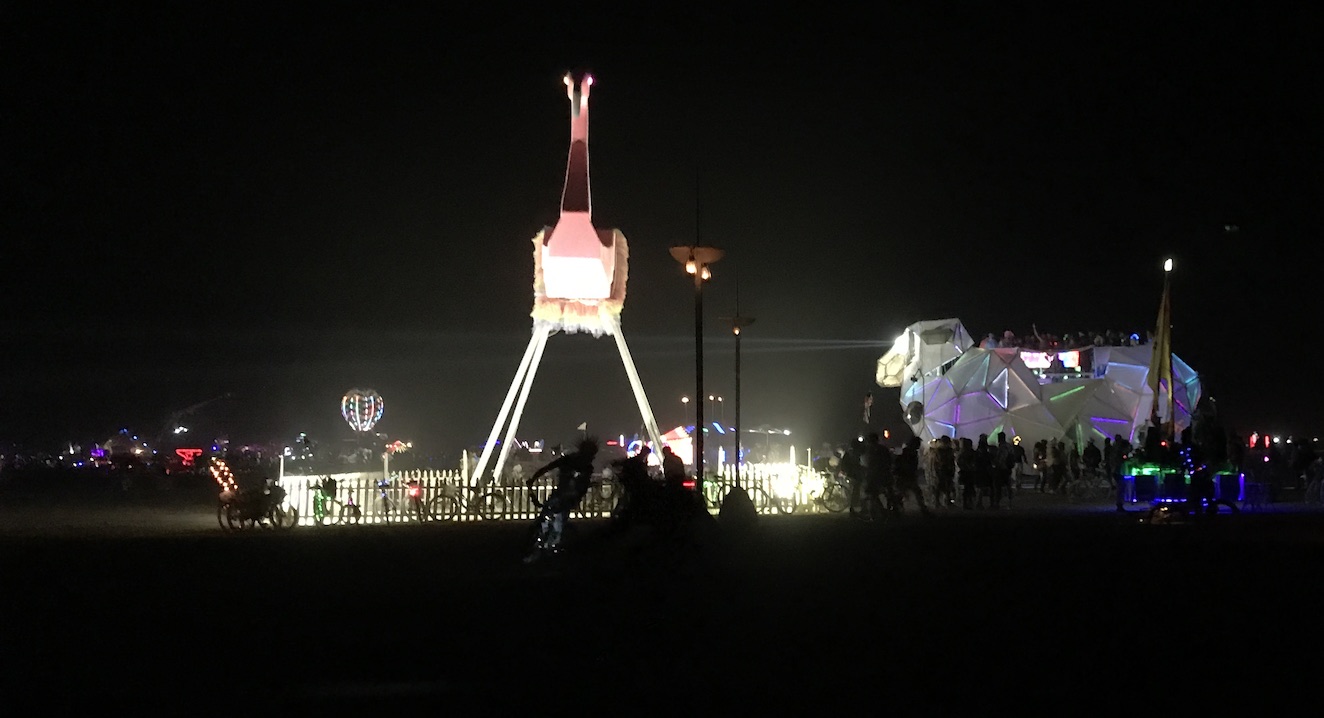 The hardware re-design, process re-design, documentation, and training all contributed to a much more smooth and rapid deployment and operation of BAAAHS on the playa this year. I can’t wait to see what projects and opportunities arise in 2018. I’m hoping to help make fire happen! If any of this sounds interesting reach out, inquire, and join us in 2018.