I’ve spent the last few weeks at work investigating and evaluating API Gateways to drop in front of our present architecture. One of the candidates for evaluation was Amazon’s API Gateway. I had used API Gateway in the past for little things here and there, but never as a “simple” proxy layer to existing infrastructure. I set up a simple test and wrote a bunch of code to generate the necessary infrastructure and executed the tests…

To start, let me review what API Gateway is – from ten thousand feet, API Gateway allows for rapid development of REST-based endpoints by defining resource(s), method(s) and integration(s) of those methods. On the backend, API Gateway integrates with:

Proxying with lambdas is straightforward – API Gateway forwards requests to the Lambda which can be written to do anything with those requests. For this test the lambda opens a connection to the internally available nginx instance, however, it could just as easily be a redis cluster, mongo, or postgres instance. 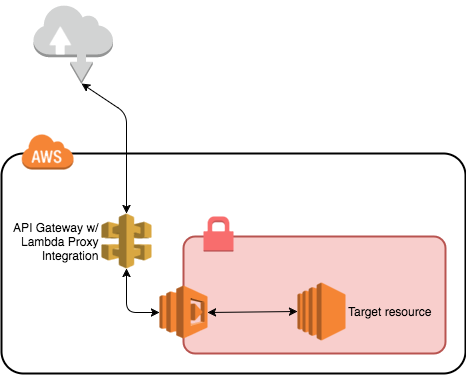 From a security standpoint, Lambdas are an attractive option because they allow API Gateway to be the isolating barrier from the outside world to the internal networks. This is accomplished by attaching an AWS Security Group and Subnet to the proxying lambda function.

A static endpoint is configured in our POC Lambda which routes to a single web server. In reality, our function would route to an internal ELB, or routing layer (e.g. kong, zuul, nginx etc…). VPC attached Lambdas do incur startup costs (measured in time) and are limited by the number of ENIs that can be bound within the assigned subnets.

If your API returns binary content, you’ll need additional logic handling and API Gateway response type configuration for a Lambda integration. I did not go through this effort for these tests.

In addition to proxying with Lambdas, API Gateway allows for proxying to public HTTP endpoints. The proxy integration method coupled with client certificates and request signing allows API Gateway to provide its value-add before it shuttles traffic up-stream. 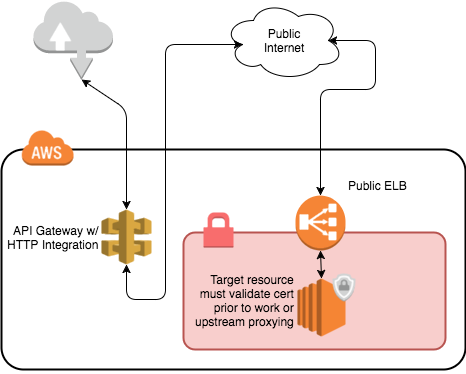 Unlike Proxying via Lambda, Proxying via HTTP should require next to little maintenance and tuning. However, the logical architecture for this approach smells – validating certificates requires additional resources in front of infrastructure. It would be awesome if Amazon updated their Application Load Balancer to verify signed requests.

To get a rough idea of how these two approaches would perform I set up a simple test… The test leverages an nginx instance with various pages, paths, and sizes. The nginx instance is in a private subnet and is not accessible from the outside world.

A public non-SSL-enabled ELB exists to shuttle traffic from the outside world to the nginx box.

The HTTP Proxy test does not use client certificate signing as I didn’t want to go through the work of having the private, nginx target instance verify said requests.

The following tests were executed using wrk on a dedicated EC2 instance, each for 30 seconds, 25 threads, and 2 connections per thread (for a total of 50 per test):

The resource allocations for the lambdas were very generous given the VPC, ENI capacity formula provided by AWS here:

For the Lambda-based API Gateways, the increase in memory (and presumably CPU performance) along with additionally available network addresses seemed to allow greater throughput. However, in at least two tests (“Lambda-512” and “Lambda-1024”), the Lambdas were over-allocated network address capacity and memory and only improved marginally.